As February knocks, we are swiftly approaching a year since the COVID-19 pandemic took hold in the U.S. in March of 2020. As a larger number of the population are granted access to the vaccine, we can hopefully expect to be turning a corner. We can also expect to see the longer-term impacts of financial hardship solidify across all industries, including residential and commercial real estate.

New York protections for renters were an almost immediate reaction to the pandemic, first in the form of a 90-day moratorium on evictions for renters and commercial tenants, issued by Governor Cuomo in March of 2020. This moratorium was extended once in May, before the Tenant Safe Harbor Act was signed into law on June 30, 2020. Cuomo has since extended the moratorium five more times, specifically for commercial tenants and mortgagors, before expanding the Tenant Safe Harbor Act in September of 2020. This act is itself an extension of the Housing Stability and Tenant Protection Act, enacted in June of 2019.

Under the Tenant Safe Harbor Act, tenants cannot be evicted from their homes for non-payment of rent due to financial hardships brought on by COVID-19. Furthermore, non-payment of rent at any time during the COVID-19 period can never be used as a basis for eviction in the future, if the tenant can prove they suffered a financial hardship during that period. The act does not specifically define financial hardship, but according to national legal and real estate firm, Goulston & Storrs, courts are likely to consider tenant income history prior to and during the COVID-19 pandemic, as well as eligibility for benefits like cash assistance, SNAP programs, SCRIE, DRIE, and unemployment insurance and benefits.

While tenant protections are crucial during economic downturns like the one caused by COVID-19, the ability of landlords to overcome these financial crises without assistance can often be overestimated, especially when non-rent payment protections significantly impact cash flow. The Real Estate Weekly made a strong case for landlords in July, reminding their readers that “Landlords need to collect rent in order to provide services to tenants and to operate the building, which includes paying taxes, utilities, and mortgage payments. Without the cash-flow from rent, landlords are deprived of the resources to carry these changes.”

It is also worth noting that additional expenses have been incurred by property owners to keep up with CDC guidelines and cleaning procedures during the pandemic. Our property management company estimates that landlords and property managers may face a 5% increase on total annual budgets, depending on the building, to cover supply costs and additional labor costs.

Consider the impact of inconsistent rent payment across the city, when the NYU Furman Center estimates that at least one person in over five-hundred thousand renter households has applied for unemployment insurance during COVID-19. In NYC, at least one member in over 200,000 households have lost their job but did not file for 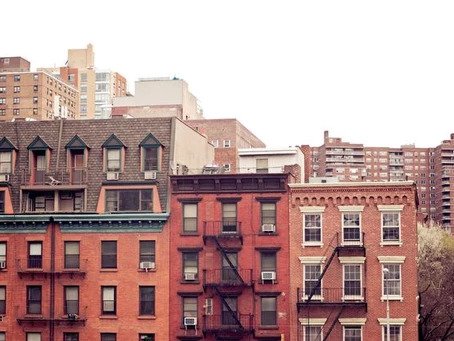 unemployment benefits. In December of 2020 the New York Times reported that over 100,000 eviction cases were pending, some predating COVID, and 40,000 cases were filed after March, 2020, many of which will likely be eligible for protection under the Tenant Safe Harbor Act. According to NOLO, similar holds on evictions have been enacted in 15 other states throughout the country, including California, Connecticut, and Maryland. Many states that have not held evictions have placed a hold on utility shut-offs. California’s eviction moratorium, originally slated to end in February, was extended on January 25th through June 30, 2021, but Governor Newsom’s law also includes a stipulation for landlord rent subsidies. According to the Sacramento Bee, subsidies financed by the latest federal stimulus bill “will cover up to 80% of the total amount of rent in arrears, provided that the landlords forgive the remaining 20% and don’t seek evictions.” California’s Judicial council anticipates two-hundred and forty thousand eviction filings in the state in 2021, with over nine-hundred thousand households at risk. Yuval Plattner, Vice President at MD Squared, believes that protections for landlords should be focused on property taxes. “The city has been increasing property taxes on landlords for years. There are many landlords in the city that have owned these buildings for 30 to 40 years and are ‘mom and pop real estate shops,’ and they will not be able to sustain their losses the same way larger real estate firms will be able to.” Tax abatements and exemptions do exist for certain scenarios, including the Condo and Cooperative Tax Abatement is their own New York City apartment. Eco-friendly abatements are newly available for units with solar or green roofs, and exemptions exist for landlords who are also senior citizens, veterans, or members of the clergy. None of these tax benefits are specific to losses incurred by non-payment of rent or other challenges posed to property owners by COVID-19, however. In November, Spectrum News reported that property values could actually decline as a result of the Tenant Safe Harbor Act, “leading to landlords off-loading rental properties in New York, and deterring future investors. While we are seeing rental rates reducing across the board by 30-40%, this is not a direct consequence of the Safe Harbor Act, in most cases.

“This is more to do with the pandemic and general market conditions,” Yuval weighs in. “Since investment properties trade based on net cash flows, and income has reduced while expenses have either remained the same or even gone higher, the value of the property has reduced. My sense is that it could take years before we reach pre-pandemic valuations again.”

This outlook is shared by respondents to a national GlobeSt survey, 39% of whom anticipate a fall in valuations of 5-10%. Thirty one percent of those surveyed expect a larger impact. Time will tell whether these predictions hold, and what a mass exodus from the city to the suburbs might have in store for a once bustling metropolis.